The concept of the “smashed” cucumber salad showed up last week on one of my favorite food podcasts. The next day I heard about it on another food podcast. The third day, I stumbled across a picture of it online. Was the universe trying to tell me something? Was it in my destiny to make smashed cucumber salads?

No, I’m not drunk, or anything fun like that, and neither are these “smashed” cucumbers. They are actually SMASHED using a knife or even a frying pan. Originally a Sichuan dish, the practice of smashing cucumbers, salting them, and then vibrantly dressing them has gone mainstream.

Here are my two takes on the concept: One of them is a light, summery take on a Thai green curry. The the other one was inspired by a traditionally meat and dairy heavy Italian chopped salad.

END_OF_DOCUMENT_TOKEN_TO_BE_REPLACED

Looking for anything in particular?

Welcome to Monson Made This 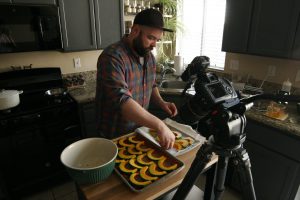 Vegan Food for Everyone!

Hi! I’m Michael, and I’m obsessed with cooking vegan food and developing vegan recipes. I love reinventing my childhood (and even my adulthood) favorite foods into vegan works of edible art. I’ve been vegan for just over two years now, so join me on this journey of discovery in the plant-based world of incredible food. Click the YouTube link above to watch all of my videos, and don’t forget to follow me on Instagram.